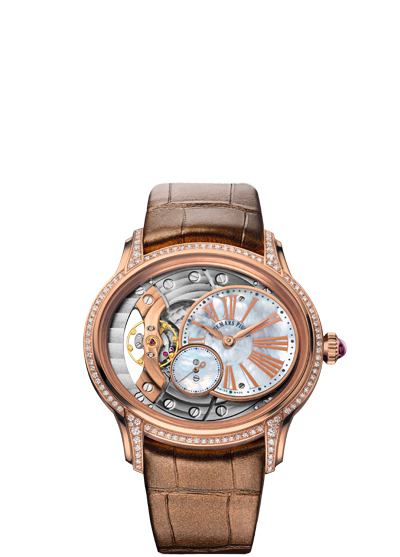 The recently released Audemars Piguet  Millenary collection, offered in three different versions, features a new hand-wound Manufacture calibre 5201 that has been conceived of especially to  fit the intriguing oval case shape that makes this line so beloved. The open-design movement reveals the balance wheel, also known as the beating heart of the watch, which has been built to exacting standards expressly for women.

To celebrate the launch of the line, a new advertising campaign makes its debut this month. The new campaign — with video and print — plays off of the brand’s famed “To break the rules, one must first master them” campaign and ensuing  “There are Exceptions to Every Rule” campaign. The new ads feature model Anouck Lepère, styled by Jerry Stafford and photographed  by world famous photographer David Bailey. According to Bailey, “the stronger the woman the bigger the mystery. Everyone has a story – you just have to find it.”